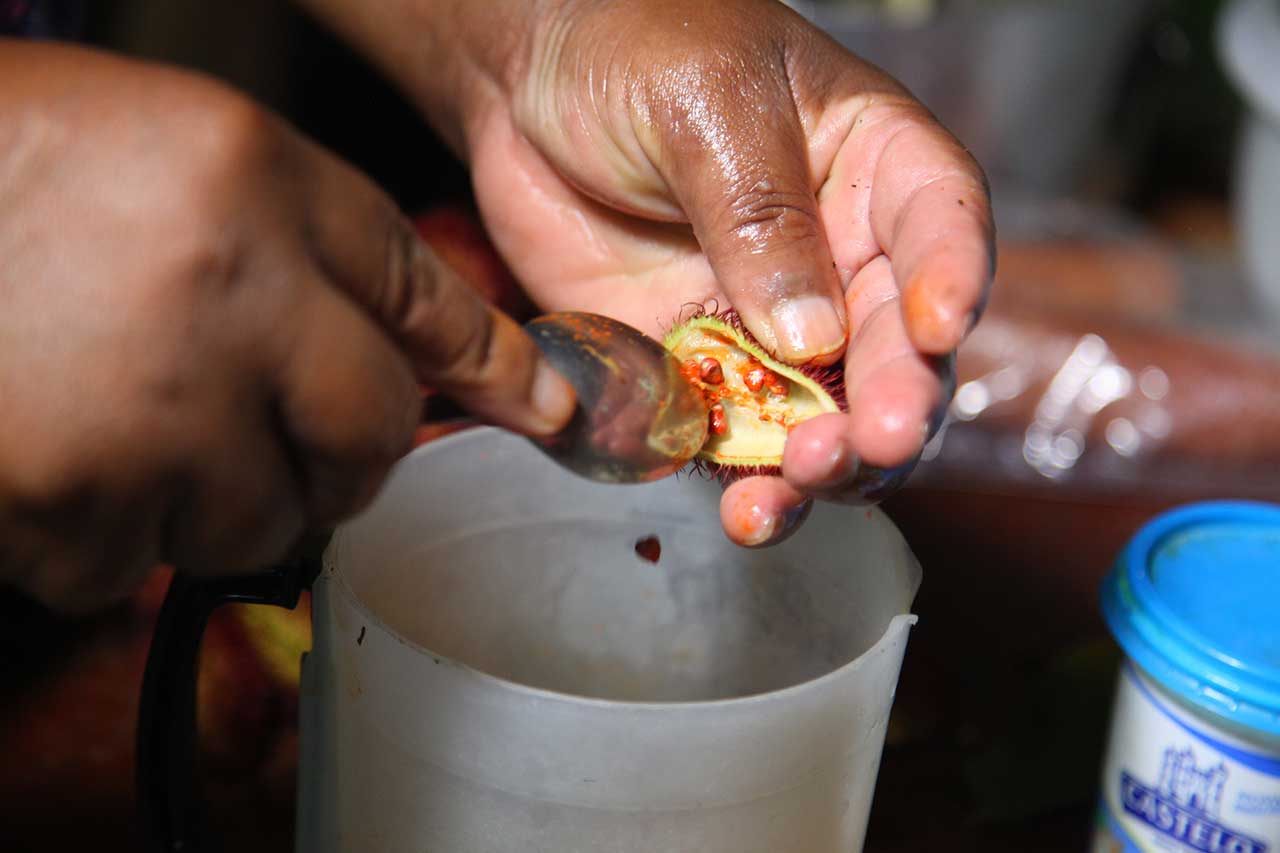 Ethiopian descendant of slaves, São Benedito lived in Italy during the first half of the sixteenth century. According to reports, after 17 years among the hermits, he was appointed to be a cook at the Capuchin Convent, from where he took some food from the pantry and hid them under his clothes, to take to needy people. Because of this hagiographic curriculum from the Colonial period São Benedito became a very popular saint in Brazil, whose devotion has a strong influence on the religiosity of the black population.

Not coincidentally, the name of the rural black community of São Benedito, located in São Fidélis honors this saint, considered the protector of cooks and blacks. The group consists of approximately 60 people, where they annually celebrate the Black Awareness Day on 23 November. On that date it is served, among other recipes, stuffed manioc, an invention of Maria Alda Pereira da Silva (53 years), one of the people in the community responsible for the transmission of knowledge.

The culinary knowledge Mrs Alda built up in the wake of the memories of her parents preparing dishes. With affection, narrates the stories as if she was tasting the pork that her mother used to cook: "Fresh pork, kept in the can, right? [...] It was too good, I can not do that. It was a delight, it could still be in the fat, we could go, get it and eat. It was very good. She did not take the fat of the meat, fry it straight. [...] It was wonderful, we used to take, we made roasted flour at home. Dad used to do and filled those biscuit tin full of toasted flour at home. It quite hit in the mouth and still be crispy. We would crop the corn [...] I myself did this a lot: picked up a fork and saw if she [the mother] was not looking, going into the can of fat stirred, stirred up, looking for some meat. Then, when I found, I grabbed, shoved the fork into the meat, and took and mixed... and mixed the fat into the
flour [laughs]. [...] Then, from time to time, she would heat the meat to make it, right? She would say: the meat is getting smaller [laughs]. She knew it was me taking, It was always me."

While the pork is associated with the image and the memories of her mother, the recipe of stuffed manioc was created through observation of what her father used to do. Ms Alda watched, carefully, the manioc dough been prepared by her father. As she said: "... there has been a creation of the kitchen we have been there cooking for a long time. Then someone comes and gives an idea of something. So I was more or less wondering how I could do a filling, like me filling pancake. I imagined filling the manioc, which should also be a wonder equal to a pancake, and I did like the shape of the pancake. This is not the first time I have done before, the idea today was different, have to show up."

Another important member of the Quilombo of São Benedito, João Batista also learned to cook by watching the elders and he likes to prepare everything. However, the most celebrated dishes are beans and bean stew; Indeed, Mr. Joao summarizes: "Love is the spice of all things. Love seasons everything! "