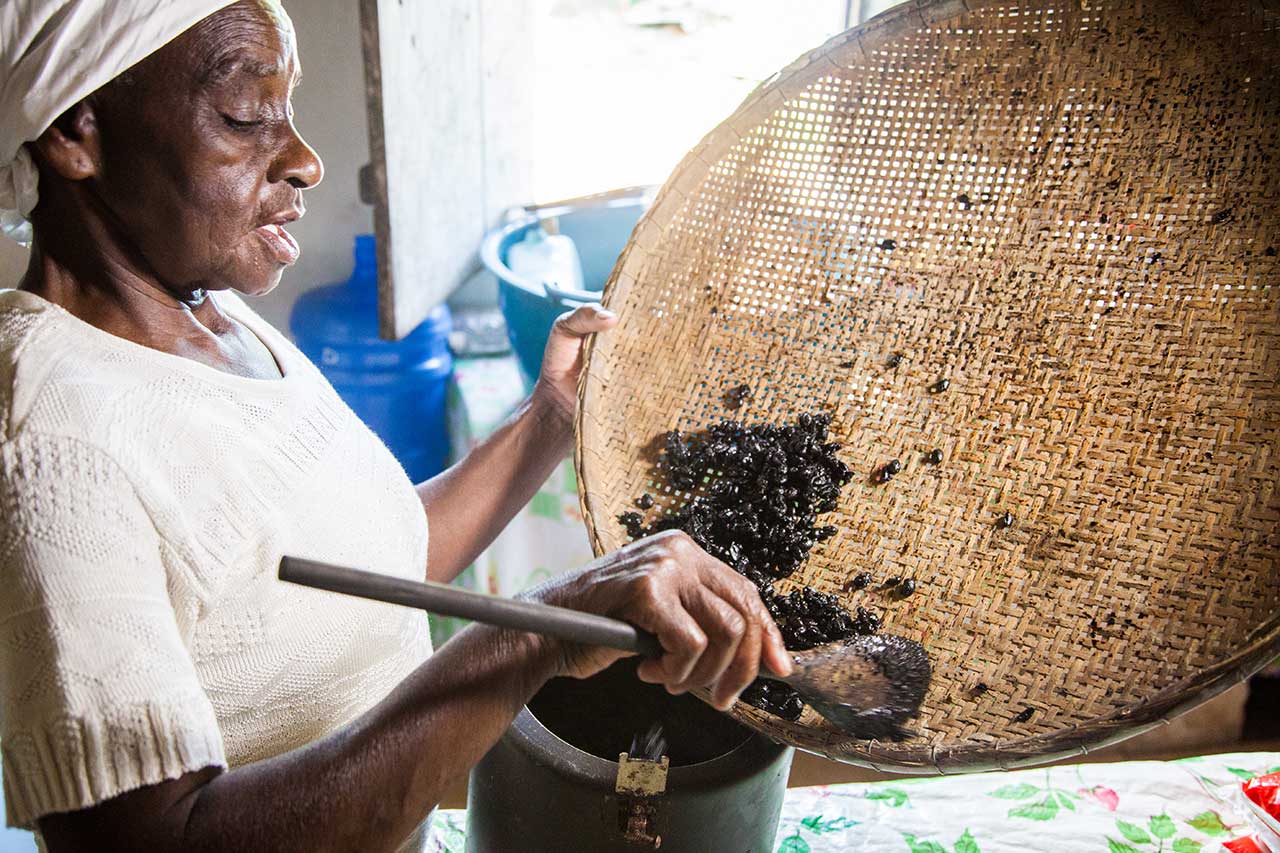 The Marambaia Island, a national security area controlled by the Brazilian Navy, is located in the coastal city of Mangaratiba. The vegetation of the island possessed reserves of the Atlantic Forest, typical of southeastern Brazil, mangroves and large areas of sandbanks, which include beaches and dunes.

On the beach of the Navy Training Center (NTC), you can see brick houses where, since 1971, military and federal employees reside. The east of the island, towards the sandbank, and west, toward the tip of Marambaia, we observe brick houses and stucco, home to the direct and indirect descendants of former slaves of Commendatory abbot Joaquim de Souza Breves, known as Mr. coffee and trafficking during the slavery period. Today, the population of this island is the remnant of Quilombo Community Marambaia Island, group fighting for possession of the land they occupy.

In this paradisiacal scenery, on a sunny April morning, the Maroons community leaders provided a delicious breakfast, complete with tasting the savory cornmeal cake with coconut, a typical delicacy among islanders. Laughing in conversation, the spokesman and current president of Quilombo community pool, Nilton Carlos Alves, 32, told how customary practices, such as, fishing, cooking and scuffed, reveal a major feature group: collective use of the territory.

Despite the complexity of this territorial situation, Nilton Carlos Alves in the media noise laughter, explained about the aggregator function that provides food preparation. In the past, the time of planting to food preparation, all steps were cause for residents to be together as Nilton says: "We could plant the sugarcane and then harvest and then we always got together on Sundays . Usually, on Sunday morning, after Mass or Sunday afternoon to grind the cane. Then the next day, make coffee cane, we could eat the sweet potato, cassava that we panted, right? The corn that we will reap.”

The joy of being together and preparing food, as described Nilton with smile on his lips: "If our grandmother used to say: Oh! tomorrow we will kill a chicken! Then we would have to sleep with that thought. Because we will kill a chicken [...]. Ah, who will be going to kill is Grandma. [The grandmother] did not let us kill; in fact, she would not even let us see her killing, right? We were kids. I'll pluck, I'll help her clean, I will help with the preparation. We got involved a lot.”

Fishing is very important for the group, so the fish is remembered as one of the most traditional food practices, as highlighted by Nilton: "I think it is really very important in the life of traditional community of Maroons. We can go there and harvest the fish, and catch, and put on the barbecue, make porridge, fish and banana.”

Still on the fish, Mrs. Dulce, 61, a resident of the community, who still remember the girl was preparing barbecued: "Sometimes, let the fire for us. Then the fire, those logs ... We carried the coals for not having anything to eat, to burn. Leave that fish ... We made soup of flour, that would put water with the flour, we made water soup to eat with baked fish.”

“No man is an isolated island," wrote the English poet John Done. That's the spirit that favors the permanence of the Maroons in Marambaia, because the collective use of their territory at cooking and gastronomy are experiences that reinforce the bonds between people.